Somewhere on the road, Mitsubishi lost its appetite for good looking cars and started to recycle old names for new cars that didn’t have anything in common with the previous models.
A good example was the Mitsubishi Space Star. The previous generation of Space Star was a compact MPV based on the same platform as the European version of the Mitsubishi Lancer, named Carisma. It was the MPV with a sedan handling. In other markets, the 2013 Space Star was named Mirage. Unlike its Mirage predecessors, it wasn’t offered as a coupe.

The 2013 Space Star was the replacement of the Mitsubishi Colt. A car that was built for the supermini segment in Europe. But unlike the Colt, the Space Star featured a bland design. The first facelift was launched in 2015 and only then the car started to pick-up in sales. Its low price and economic engines were its main advantages on the market

Inside, the Space Star/Mirage offered room for five passengers, but smaller sized for the rear seats. In the front, the higher seating position was appealing for those who use to drive with their seats lifted as much as possible. The instrument cluster featured a design that can bring back memories from the ’90s cars.

For the engines, the Space Star/Mirage installed economical units with 1.0-liter or 1.2-liter gasoline engines. The standard transmission for the 1.0-liter was a 5-speed manual or a CVT for the later version. 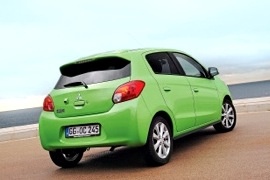