The Morgan Plus 4 was like a time capsule for two people, but with the addition of two extra seats in the back, it was a charming time journey for a whole family.
Unlike most other carmakers, the Morgan company belonged to the same family since its beginning in 1910. Over time, it managed to improve its products, but only when it was required. In 1950, it introduced the +4 model and built it almost unchanged for over fifty years. The four-seat option was canceled by the mid-’80s due to safety regulations. By the 2000s, the carmaker brought that option back. In 2006, the carmaker had to improve the car, again, due to emission requirements.

Judged by its look, the Morgan +4 4 Seater looked like a vehicle from the ’50s. Its wide, long, and curved front wheel fenders featured round headlights with chromed rims around the glass area. Its turn signals were placed below them. Unlike the two-seat version, the 4-Seater featured side windows for the rear passengers. In the back, the car featured an extended body that supported the spare wheel and the taillights.

Inside, the hand-crafted leather-clad interior was a mix between old fashion and new elements. The tachometer was optimistically marked up to 9.000 RPMs, and the charging port for a smartphone as part of the new edge. Its bucket seats featured adjustable headrests and seat belts. Maybe that’s how Morgan passed the safety tests.

Under the hood, the car manufacturer mixed a Ford engine with a Mazda gearbox. It didn’t provide too much power or torque, but it was more than enough, thanks to the car’s low weight. Worth mentioning that the car featured the same suspension design from the original 1950 model. 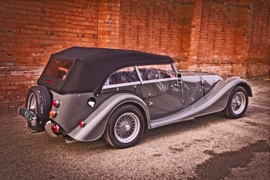