The third generation of the Nissan Murano crossover has received a mid-cycle facelift at the same time as the Maxima sedan, both having been revealed at the 2018 Los Angeles Auto Show despite having a one-year difference between them.
One of the main focus points was a slightly updated exterior and interior, although the modifications are minimal for a facelift. The LED headlights and taillights have been redesigned and the so-called V-motion grille is now more pronounced compared to its predecessor. There are also three new interior trim finishers called Dark Wood-Tone (Platinum), Light Wood-Tone (S, SV, SL) and Metallic (S, SV, SL). 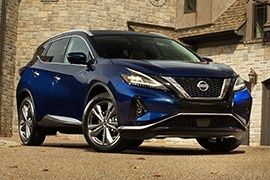