Nissan unveiled the third generation of its compact SUV Qashqai at the beginning of 2021, and it showed a completely new design language for the Japanese brand.
In 2007, Nissan surprised the market with the first generation of the Qashqai. It was a revolutionary vehicle for the Japanese carmaker, who offered the compact SUV as an alternative for the compact station wagons. Thanks to Nissan’s experience in 4x4 vehicles, the Qashqai quickly became one of the best-selling vehicles in its segment and proved to be a trustworthy partner for its customers.

The 2021 model was built on the CMF-C Alliance platform shared with the Nissan Rogue and Mitsubishi Outlander. Its front grille with an enlarged V-shaped chromed trim was a clear feature for the Nissan brand. With the fourth generation, the Qashqai displayed a different light signature with the LED daytime running lights at the top and then the slim LED headlights underneath. Its bold look was a clear statement for the successful car, which was sold in over three million units worldwide in its previous generations.

Inside, Nissan sent the Qashqai into the new technology age with the introduction of the 9” touch-screen display for the infotainment system and a 12.3” TFT display in the instrument cluster. In addition to these, Nissan introduced a 10.8” Head-up Display that showed all the necessary information projected on the windscreen.

Under the hood, the carmaker introduced the e-Power version that was based on a gasoline engine and an electric motor. The rest of the range was filled with mild-hybrid versions powered by a 1.3-liter turbocharged gasoline engine. There are no turbo-diesel versions anymore. 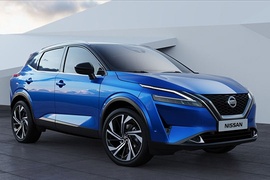