The Nissan Serena began its production in 1991 and started off as a compact passenger minivan.
The van’s size increased during the following generations.

In 2016, Nissan unveiled the fifth generation of the model. The biggest feature added was Nissan’s ProPilot technology, an advanced driver assistance system designed for highway use. The technology was developed to maintain the car’s lane position and distance from the vehicle in front.

The interior became more spacious and the wheelbase was extended by 180 mm. New features were included to increase the ease of use. The sliding doors can easily be opened by sliding your foot under the door, so that you wouldn’t need to use your hands.

While still keeping some design details of the previous Serena model, the 2016 has a more dynamic and refined look: a refreshed front grille, a floating roof design and 13-color availability, including a new two-tone design.

Other significant features include a 6-port USB power socket, Zero Gravity seats with spinal support, a large 7-inch display and a capless fuel filler. The cabin’s quietness was improved and the model’s handling was upgraded as well, especially at low speeds.

The car is equipped with an automatic parking assist system, a smart rearview mirror and an Around View Monitor that provides a virtual 360-degree scene. Nissan provided important safety features such as Forward Emergency Braking, Emergency Assist and Lane Departure Warning. Lots of other key safety and environmental features are available. 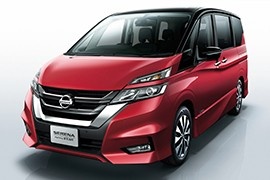