Oldsmobile introduced the fourth generation of the Cutlass in 1973 as a 1974 model year and offered it in a few trim levels and a choice of three bodyes: coupe, a sedan with four doors, and station wagon.
The 1974 model was also known as the Collonade due to the new GM “Collonade” A-body platform. While the oil crisis affected the U.S. market, the car industry faced a new challenge for fuel-efficiency. But GM responded by expanding its range of personal luxury vehicles.

It was the era of fake-cabriolet vehicles, with a hard-top, no B-pillars, and two doors. The Cutlass S featured a vinyl top that covered the roof and the wide C-pillar that incorporated a small window. At the back, the sloped trunk lid created an image of a dynamic car in full acceleration. But despite its engine, it was a personal luxury coupe.

Inside, the carmaker installed all the bells and whistles it had in stock. The entire interior was covered in leather or vinyl, and the piece-du-resistance was the swiveling driver seat, which rotated 90 degrees on the left for easier ingress and egress. Also, that move cleared the path for the rear seat passengers. The dashboard was vinyl covered and centered around the driver, with a tilted center stack. A center console separated the front bucket seats and created a personal area for each of them.

Under the hood, GM installed the 350 ci engine (5.7-liter), which was the middle way between the top-spec 445 ci (7.3-liter) and the weak 260 ci (4.3-liter). Oldsmobile offered the Cutlass S exclusively with a three-speed automatic transmission. The car was part of the most successful Cutlass range, which managed to get the top spot in the U.S. car sales for two consecutive years. 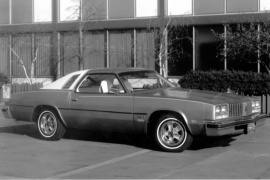