In 2013, Opel decided to do a major facelift to its flagship, the Insignia.
Since its launch, in 2008, Opel sold more than 500,000 units before the refreshed model. The facelifted version received new engines, a new infotainment system, and some exterior details.

On the front, on upper trim levels, the bi-Xenon headlights are offered as standard and the DRL are full-LED now. The side view of the Insignia Hatchback shows an extension of the roofline towards the rear spoiler on the spoiler. The big opening of the liftgate reveals 530 liters (18.7 cu-ft) of trunk space, and that can be extended up to 1470 liters (52 cu-ft) by folding the backseats. In the rear, Opel installed new LED taillights that are offered as standard on all trim levels.

Inside, the AGR-certified seats are built for long roads. This certificate was obtained after proving to their ergonomic design will provide the best support for the spinal and the lumbar zone. A new infotainment system was installed, with an 8” touch-screen in the central console. It can be accessed via voice commands, steering buttons or a touchpad.

The engine range starts with a new, 1.4-liter turbocharged gasoline engine that offers 140 hp. It is mated to a 6-speed manual. The 2013 Opel Insignia Sedan offered the choice between the three propulsion alternatives gasoline, diesel and LPG (Liquefied Petroleum Gas); power output ranges from 81 kW/110 hp to 239 kW/325 hp. 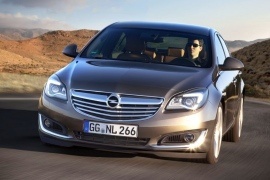