One of the last remaining old-school front-engine, rear-wheel-drive sports cars powered by a V8 engine and featuring a manual transmission, the Panoz Avezzano replaced the Esperante nameplate without completely changing the model’s original recipe.
Panoz is mostly known as an American carmaker that builds road models mostly to fund its racing endeavors, much like Ferrari was in its early days. That said, the Avezzano is in many way the street-legal version of a racing car, with its GT4 version competing in the Pirelli World Challenge championship.

The sport car’s name has a special meaning, since it harks back to the Italian town of Avezzano, which was destroyed by an earthquake in 1915, spurring the emigration of Donald Panoz’s grandfather to the United States.

Its body is largely made from aerospace-grade SPF aluminum and carbon fiber, with the model preserving the racing car’s side exhaust exits, a motorsport inspired front splitter, side skirts and rear diffuser. The chassis itself is made from extruded aluminum but also features tubular steel frames and various carbon fiber parts.

Just like its predecessor, the Avezzano is powered in standard guise by a 6.2-liter Chevy-based V8, offering at least 430 horsepower. As an option, customers can switch to a supercharged version of the same engine, which delivers over 580 horsepower. Both engines sent their power to the rear wheels through a manual six-speed transmission. 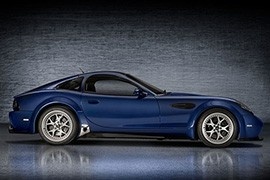