In September 2018, Perodua introduced the second facelift for the Alza, the first one being launched in 2014, and brought more features for the entire range.
Perodua tried to keep its promise to provide the most affordable seven-seat minivan on the Malaysian market. Its Alza MPV was chased by the other local competitor, Proton Exora. When the Alza’s second facelift arrived, it was available in three trim levels, and the Standard version sported the 2014 model-year bumpers but still kept a few other amenities from the 2019 model.

On the exterior, the 2018 Alza featured a new aerodynamic package and new headlights, but only for the SE and Advance trim levels. The Standard model kept the older ones which were similarly shaped but with a different interior lamp design. The new bumper received a slightly more aggressive styling on the side scoop area, while the grille sported two chromed horizontal slats. All versions received standard fog lights. In the back, the taillights got clear lenses instead of the red ones from the 2014 model (only for SE and Advance).

Perodua introduced more interior changes, especially for the Advance trim level, which received leather seats with a nice carbon-fiber look detail for a center strip. On the center stack, the carmaker installed a new infotainment unit for the entire range. The Advance version featured an additional screen mounted on the ceiling for the rear passengers/children for the full-options version. All versions received USB and Bluetooth connectivity, but only the Advance was available with Android Auto and touch-screen. 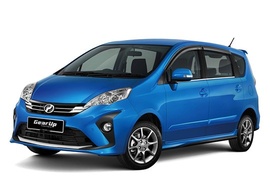