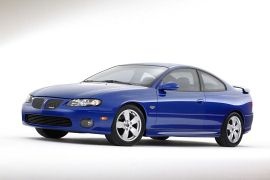 The resurrection of the Pontiac GTO nameplate came in 2003.
It wasn’t a completely new car, but a carried-over Holden Monaro brought to the U.S. market from Australia.

Pontiac fans cried for a revival of the GTO ever since the old muscle car was cut down from the production line in 1974. After 18 years, Bob Lutz (former chairman of the GM) announced that a new generation will come soon. It took them three years to bring the car in the U.S. due to some internal rules. As Lutz stated, it was an “unnecessarily long gestation period”. But the GTO finally hit the showroom in North America in 2004.

The long hood raked A-pillars and sloped back made the car look like it was designed for a sequel of Mad Max. A specific Pontiac grille and narrow headlights made a good impression at first sight. To improve the cooling, a wider grille was installed in the apron. From the side, the ascending beltline and the short trunk increase the sporty image. As a final touch, a small wing was added in the back. The twin tailpipes on the driver’s side sounded like a true, old-school, muscle car.

Inside, the GTO featured two sport-bucket seats in the front and a bench in the rear. The instrument cluster featured four dials and four LCD under each of them. On the center stack, there was the stereo system and the climate control unit.

The GTO was assembled in Australia with an LS1, 400 hp American engine, and exported in North America. That led to a high sticker price. Since it came too late to the party, with a dress that was no longer in fashion and with a high sticker-price, the GTO experiment died in just two years. 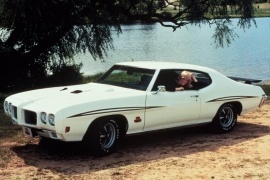 Unlike the 1964 model, when the GTO was an option package, in 1970, it was a specific model, and it showed it not only on the outside but also on the drag-strip where it was a fierce contender.
Designed to rule the muscle car arena, the GTO was still considered THE muscle car of all kinds. It offered enough to win almost any kind of drag race, but the rest was up to the driver.

The outside look of the car marked a return to the horizontally-mounted twin-headlamps, unlike the ’65 model, which featured the vertically-mounted ones. But perhaps the most important part of the 1970 model year was the body shape, which was much smoother than before. The design team dropped the angular lines and sharp angles for curves and soft edges. Its long hood hosted two vents, and the greenhouse featured a long, sloped rear window. All four side windows could roll down completely, creating a faux-cabriolet shape for the car.

Inside, the GTO offered a vinyl interior with bucket seats with wide headrests at the front and a bench in the rear. The floor-mounted gear stick for the manual transmission separated the front seats and was mounted on the tall center transmission tunnel.

Under the hood, Pontiac offered the GTO with two engine versions: a 6.5-liter V8 and a mighty 7.5-liter V8, both being paired to a standard three-speed manual. GM also provided an option for a close-ratio four-speed manual. As expected, a limited-slip differential was a standard feature for the GTO. 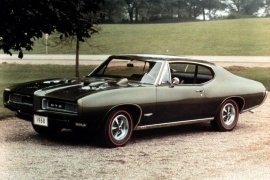 The second generation of the Pontiac GTO was praised by the automotive press as “an engineering marvel of its times”.
It was powerful and looked great. It was a true muscle car.

The godfather of the GTO, Jim Wangers, worked for the Pontiac Motor Division PR agency and found a loop in the company’s policy to offer powerful engines. So, the 400 cu-in engine was offered as an option for the Pontiac LeMans, on the GTO trim level. The name GTO was given by John DeLorean (who would later leave the company and create the DeLorean Motor Company) after the Italian GTO abbreviation (Gran Turismo Omologato).

The second generation was built on the success recorded by the LeMans GTO and the GM approved the car for production. It was a long and sleek car for that muscle-car era. The twin-round
headlights in the front were now horizontally placed instead of vertically, as on the LeMans GTO. The side beltline was descending just to rise again in front of the rear fenders.

Inside, the car featured two individual front seats and a bench seat in the back. The door-panels featured the GTO badges on them. The flat dash-panel hosted the controls for lights, ignition, wipers, and the lighter. The floor-mounted gearshift selector for the automatic transmission featured a wooden panel.

The Pontiac GTO featured a 6.6-liter V8 just to respect the company policy, which offered 350 hp. It was mated as standard to a 4-speed manual. There was an option for 3-speed auto as well. In 1970, GM lifted restrictions for engine displacement and allowed the 455 cu-in (7.5-liter) engine on the GTO, but the power disclosed was not real. It was stated as 366 hp, but it featured 500 lb-ft (678 Nm) of torque. 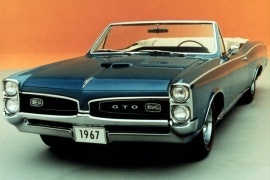 Considered the first muscle car, the Pontiac GTO is one of the most famous cars ever produced.
Nicknamed the “Goat”, the GTO was built by a GM’s special division and was manufactured between 1964 and 1974, 10 years of great success.

If wondering where the GTO nameplate came from, the Goat was actually intended for racing and the name was inspired from the Ferrari GTO.

As for the younger clients the looks and power mattered the most when it came to buying a car, the GTO had the perfect recipe: a V8 engine mixed with superb styling.

The 1976 model was available in 3 body styles: hardtop, convertible and sports coupe.

Compared to the 1964 GTO, the exterior design suffered minor updates, with the main focus being on performance. Fitted with a new 6.4-liter V8 engine, the Pontiac GTO hid 335 ponies under its hood. It was also available with two extra options: economy and high output - 265 hp with the economy, and 360 hp with the latter.

With all marketing efforts concentrated into earning the younger peoples’ attention, the GTO was also featured in movie, transforming it into a legendary vehicle.

After the GTO’s release, the other carmakers started to design their own models for even more attractive prices: the Oldsmobile and the Plymouth were the main competitors. 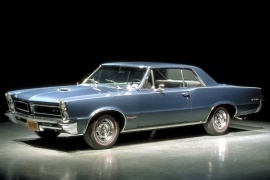 The Pontiac GTO is regarded as the first muscle car ever build, being manufactured until 2006 although the production was stopped between 1974 and 2004.
The first model of the car was powered by a 6.4 V8 engine based on a carburetor which could produce a maximum power of 375 horsepower and a top speed of 120 mph. Combined with a 3-speed manual transmission and a rear wheel drive system, the GTO could accelerate from 0 to 100 km/h in no less than 7.9 seconds which is quite a good time for a car launched in 1965. The GTO is said to be a car especially addressed to the young segment of customers, although it recorded high sales in most client categories. 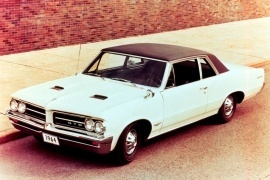 While in the beginning was just a package for the Tempest, the Pontiac GTO became one of the most notorious cars built by the GM-owned brand and a famed muscle car.
Some would say that it was the first muscle car.

The Tempest LeMans GTO was available in thee body options and, while the hero’s of the drag-strips were the closed body ones, the convertible was also a star on the streets. It could race or cruise with ease or kick hard thanks to its powerful engine. It could beat a Ferrari GTO on a drag-strip, even though it couldn’t match the Italian stallion on a road circuit.

In 1964, Pontiac tried a different approach and used horizontally-mounted dual headlamps at the front instead of the vertically-mounted ones. Later on, it reconsidered that decision, but the ’64 model-year came with that setup. That allowed the carmaker to install a traditional grille, but with the unique Pontiac vertical slat in the middle. Its straight lines followed a different design language, with flat areas and angular shapes. The roof-top was completely retractable behind the rear bench, taking some space from the trunk, which was big enough anyway.

Inside, the GTO owners had an option for a standard dashboard or an enhanced one with a larger tachometer and an oil-pressure gauge. While it was designed for performance, GM’s managers knew the importance of those dials. At the front, it was available with two bucket seats, while the rear passengers could sit on a vinyl-covered bench.

Under the hood, the carmaker stuck a 6.4-liter fed by three carburetors. It was paired as standard with a three-speed manual gearbox and an option for a four-speed. For lazy ones, Pontiac included a two-speed automatic on the list. Regardless of the transmission, all versions receive a limited-slip differential.