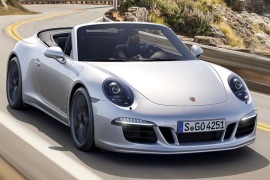 When combining a seriously fast car with an open-top, the result should be a roadster.
Porsche decided to make a vehicle lineup with track performances but daily usability. And then, chopped its roof and made it a Cabriolet.

The Porsche 911 Carrera 4 GTS Convertible was launched in 2014. It was the open-top version for the Carrera 4 GTS. It featured the same exterior details such as the Porsche Turbo S wheels, carbo-ceramic brakes, and the rear pop-up wing. The lowered suspension increased the cornering speed ability.

The Carrera 4 GTS was made to be a bridge between the Carrera S and the Carrera GT3. Even if it didn’t feature the all-wheel-steering system, it was still very fast and able to tackle a race-track with honorable results. The GTS offered 30 more hp than the S and that was applied on the Cabriolet as well.

Inside, there was room for two passengers, even if there was a pair of seats in the back. Even the manufacturer recognized that nobody could be seated there and this is why it trimmed only the front seats in Alcantara.

From the performance point of view, the Carrera 4 GTS Cabriolet was slower than the Carrera 4 GTS Coupe. But in terms of leisure and open-top driving, it did offer a different perspective. And it wasn’t a slow car whatsoever. Moreover, due to its all-wheel-drive, it could handle well the snow-covered roads, with or without the top down.