Introduced at the 2018 Los Angeles Motor Show, the Porsche 911 Carrera 4S showed an important evolution compared to the previous generation.
It is the eighth generation of the German sports car manufacturer from Stuttgart.

The 911 always had that great spirit of attraction and the eighth generation didn’t lose its steam. The eighth generation of the Porsche 911 came with full LED headlights fitted as standard, and an optional, adaptive, Matrix-LED was available on extra-cost. Other safety features were included such as traffic sign recognition or the Lane Change Assist. For the night drive, a Night Vision Assist used an intelligent thermal imaging camera that detects persons and animals and shows them to the driver. It has a range of up to 300 meters (984 ft).

For the infotainment system, Porsche was fitted as standard with a 10.9” touchscreen display. For the sound system, up to three options are available, from Bose or Burmeister. The top version had 855 Watts. The PCM (Porsche Communication Management) can connect to Apple and Android users via Porsche Connect App. It is still not able to connect to Android Auto app.

The most important update is under the hood, where the twin-turbo engine offered 450 hp, which was mated to a standard 8-speed dual-clutch gearbox. The performance gain over the previous generation is important and had a 0-100 kph (0-62 mph) of 3.6 seconds, 0.4 faster than its predecessor. 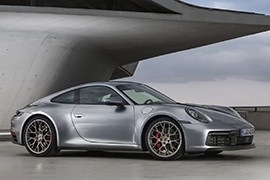