In 1968, Porsche unveiled the limited-edition Carrera T. It was designed for performance and featured a rear locking differential, to enhance acceleration and improve lap-times. It worked and it was praised by those times gentleman drivers. The 2017 Carrera T was based on the same principles, but with more technological features.

The 2017 Carrera T was lighter than the standard Carrera. It featured lightweight glass for the rear and rear side windows. At the front, it featured an aerodynamically enhanced front lip spoiler. The thin daytime running lights were installed on top of the side-scoops in the apron. The silver door-mirrors were painted in Agate Grey Metallic, regardless of the car’s color.

Inside, the rear seats, the infotainment unit, and the door handles fell out to save weight. Though, the customers could have chosen at no extra cost to install the seats and the PCM (Porsche Communication Management) back. Instead of handles, there were loops. The four-way electric sports seats featured Sport-Tex fabric. As an option, a pair of bucket seats were offered.

The technical side was far more advanced than on the 1968 version. It featured a twin-turbocharged flat-six engine, mated to a 7-speed manual gearbox. A 7-speed automatic (Dual-clutch) was offered as an option. The shorter rear ratios locking differential allowed better control of the car. Due to the all-wheel steering system, the car had a better cornering speed. 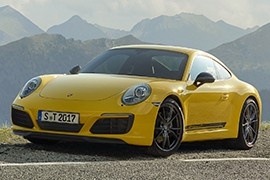