The Porsche 911 R was, probably the most impressive race-car built by Porsche, which could have been registered for road use.
It was built as a tribute to the 911 R family that started in 1967.

The recipe for any race-car was a lightweight construction a great engine and incredible fast-cornering abilities. All of these were combined in any Porsche GT, GTR, and R models. At the 2016 Geneva Motor Show, Porsche introduced the limited-edition R built in only 991 units. While it shared some parts with the GT3 RS version, it kept the tradition of a six-speed manual only. It was a car for purists.

An apron with five openings, a special color paint in white with two red stripes, and no wing in the back. The nose resembled the GT3 but the rest of the bodywork was similar to the Carrera. It didn’t have the extra-wide rear quarter panels from the Carrera 4S. They were just as wide as needed. The roof was made out of magnesium, the fenders and the hood were out of carbon fiber and the windows were from lightweight plastic.

The stripped-down interior featured carbon-fiber bucket seats with some padding on them and only front seats. There was room only for the co-driver, and no other passengers. The interior door panels were made from carbon-fiber as well. An aluminum badge on the passenger’s side showed the limited number of the vehicle. The audio and the air-conditioning were axed, to make the car lighter. There were almost no sound-deadening materials and all these efforts led to a 1370 kg (3020 lbs) overall weight.

The engine was the naturally aspirated 4.0-liter flat-six carried over from the GT3 RS. It was mated exclusively to a 6-speed manual and a short gear-stick. But, unlike the GT3 RS, it didn’t feature an interior roll-cage. 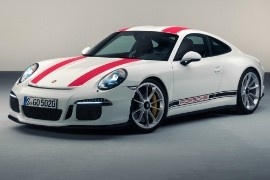