The window lines were redefined, fog lights were added, tail lights completely redesigned and LED-illuminated. Inside the car we can notice that the cabin is pretty much unchanged, however, the keypad was replaced by a new touchscreen.

The available engines are 2.0L with 154hp and 2.4L with 178hp, both Honda iVTEC powerplants paired with a 5-speed automatic transmission.

For the 2.4L engine, Proton offers full leather seats, paddle shifters and navigation. The new system works on Android and is one of Proton’s best implementations. It runs on Android 4.4 KitKat and is relatively lag-free.

The 2.4L version has a subwoofer mounted between two rear speakers and improves the audio quality, which is already impressive. Safety wise, the vehicle is quipped with dual front and side airbags, ABS, EBD, however, the ESC and VSA is for the 2.4L only. The cruise control is available on both variants. With all the changes, Proton did a great job in making the Perdana look like a sporty sedan. 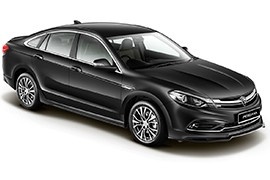