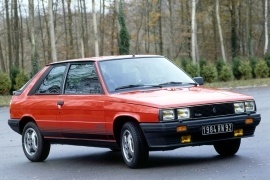 Available in two body styles, a hatchback with 3 or 5 doors respectively, the Renault 11 was introduced in 1983 and stayed in production until 1986.
The Renault 11 was pretty much the same as the Renault 9, the first difference you notice being the front of the car and the headlights. However, they had the same engines, ranging between 1.1- and 1.8-liter with the most powerful a 1.4 liter turbo producing 105 horsepower. This engine could help the car reach a top speed of 115.6 mph. Renault 11 was kept in production until 1986 when the French manufacturer ceased the production and introduced the upgraded Renault 19. 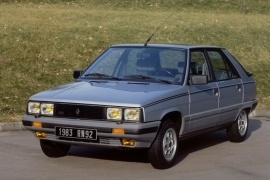 Introduced in 1983, the Renault 11 was only available as a hatchback with 3 or 5 doors respectively and was manufactured by the French company until 1986.
Predecessor of Renault 19 and successor of Renault 14, the 11 has almost the same technical specifications as the Renault 9, a separate model which was launched during the same year. The main difference between these two cars is represented by the headlights. The Renault 11 could be found in multiple engine configurations, starting with a 1.1-liter and ending with a 1.8-liter. The most powerful engine was the 1.4-liter turbo which developed 105 horsepower and a top speed of 115.6 mph.