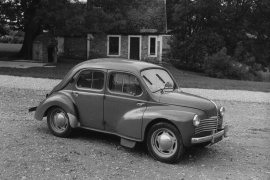 The Renault 4 CV is a small car unveiled by Renault in 1946 and is the first automobile which was sold in more than 1 million units, a fact that underlines the success of this vehicle on the market.
Predecessor of the Renault Dauphine and successor of Renault Juvaquatre, the Renault 4 CV was also produced in Japan by Hino Motors and exclusively addressed to the domestic market. The car was first shown to the public in 1946 at the Paris Auto Show but the first concepts are dated back in 1942. The 4 CV was powered by a single 750 cc engine which produced 22 horsepower and a maximum speed of 95 km/h.