First shown at the Frankfurt Motor Show in September 2013, the facelifted Magane Coupe - Cabrio goes on sale across Europe in 2014.
Significant cosmetic changes being made to the front of the car, the 2+2 convertible from the French carmaker now follows Renault’s new design philosophy. A larger diamond emblem dominates the front end, seemingly held in place by a wide V-shaped grille. The lower bumper has been completely redesigned with elegance in mind. Some changes have also been made to the interior or engine range, thus making this a more relevant rival for the VW Eos. 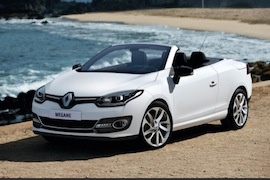