Renault designed a vehicle especially for the Indian and Indonesian market: the Triber.
It was launched in 2019 in New Delhi. The car was presented as an MPV, but it had lots of inspiration from the cross-over vehicles such as Kwid or Captur. It featured a total length of 3.99 m (13 ft) due to special tax reasons in India. But the big surprise is that it featured 7 seats inside.

With some headlights from the Captur, a platform taken from the Kwid, a high ground clearance of 182 mm (7.2”) and five doors, the Triber looks like it was made by a skilled Lego-master. The design can’t be taken as a huge success, but it was OK, especially for the Indian market where practicality is more important.

And for the practicality, the powertrain was adapted and tuned accordingly. It had a three-cylinder engine of 1 liter. The low, 72 hp was enough for the 947 kg (2087 lbs) of the vehicle. It even features an optional 5-speed automated EASY-R transmission, which is a 5-speed manual with a computer-controlled single-clutch system.

Inside, there was room for seven and even the third row had air-vents for the air-conditioner, not only the driver. The driver had other special features at his hand, such as the infotainment unit that supports both Android Auto and Apple CarPlay. 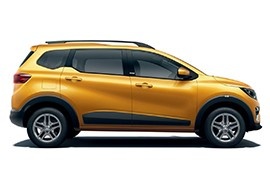