After twenty two years since it cam on the market, the Renault Twingo city car is back in 2014, coming with something it never had - a rear engine.
This, along with the rear-wheel-drive transmission makes the new Twingo even more fun to drive around the city, freeing up the front of the car and enabling it to dive faster into corners.

Stylistically, the designers started from a blank paper as you can see, the new Twingo barely resembling with its previous siblings. It has it’s own personality now, mostly inspired by the Renault 5, including the rake of the rear screen and prominent shoulders. The front fascia is dominated by the large badge on a black background, big headlights as well as the LED daytime running lights.

The car is offered in a choice of four vibrant colors - light blue, white, yellow and red - which are also found scattered through the funky interior, which also boasts a collection of newer and better materials arranged into a combination of neo and retro styled shapes. 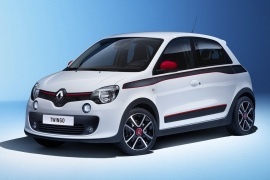