The 2016 Rolls-Royce Dawn was released as part of the Ghost/Wraith family, adding up as a convertible option while retaining the elegance and total comfort for up to four passengers.
Design wise, the Dawn doesn’t stray from Rolls-Royce’s neo-retro shapes, but does manage to look suppler than the rest of its stablemates. The new Dawn was the 3rd convertible released by Rolls Royce in 50 years and was based on the 1952 Silverdawn model.
The front comes with a slightly larger grille and bumper compared to the Wraith, while the side looks very clean with a harmonious textile roof that lacks concave surfaces or visible struts.
The interior retains the same luxury and quality as with the other model and comes with high-quality real wood trims and leather upholstery, matte or chromed metallic inserts, specially-designed clock, Bespoke Audio system and top-notch sound-deadening materials to keep outside noise from entering when the top is up. Auto journalists were saying that the Dawn is one of the quietest convertibles.
The Dawn featured a 6.6-liter V12 engine and the most powerful produced 563 hp and 575 pound-feet of torque. The car reached 60 mph in 4.9 seconds, which was rather impressive for such a massive car. The Dawn was electronically limited to 155 mph. 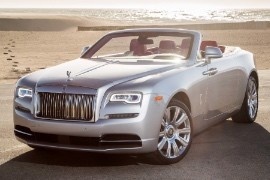