The Chinese market was a highly competitive one and all the major car-makers tried to get more of it.
Skoda even tried to get it with a special vehicle: the 2018 Kodiaq GT, an SUV built especially for China.

The Czech brand Skoda started its journey under the Volkswagen umbrella with just one model back in the ’90s. By 2018 it already had a very wide range, from the supermini citigo to the big Kodiaq SUV. The latter was built on the same MQB platform, which made it very easy to adapt to various configurations. For the SUV-coupe market, most of the offers were made by the premium car-manufacturers. In China, there were few special models and Skoda added another one to the list: the Kodiaq GT. It was unveiled in November 2018.

From the front to the A-pillars, the car looked most like any other Kodiaq from the Chinese market. The car featured a new front bumper with more aggressive styling, especially on its sides. A new badge was inserted on the front fenders, behind the wheels. From the side, the car was the same up to the A-pillars, but an arched roofline and sloped end made the car look different.

Inside, there were some modifications to the car, depending on the trim level. The top version featured sport-bucket seats with a hole under the headrest that mimicked a pass-through racing harness. The virtual cockpit for the instrument cluster was featured as standard. The infotainment unit was a carryover from the Kodiaq model as well. 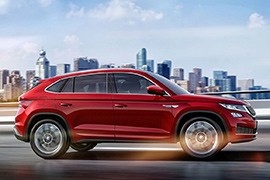