Customers always ask for more, and Tesla tried to offer them what they wanted, and even more.
That’s why the Model S received an update in 2016.

Tesla engineers knew that they could offer more for the Model S, but they didn’t want to provide it before it was tested. After that, other departments gathered and came up with new ideas. When all the parts were gathered, there was a one-man-only decision to make the changes: Elon Musk. And he gave the OK.

Most of the car remained the same, but with the new nose designed in the same line with the entry-level Model 3, it brought a new “brand-image” for Tesla cars. The flat area in the lower part of the bumper and the grille in the apron were redesigned.

Inside, the Model S didn’t look as luxurious as most of the other premium cars on the market. It still offered the biggest screen for the infotainment and command center on the center stack. The roomy interior provided enough room for five adults, with limited headroom for the rear passengers if a panoramic roof was installed. A pair of seats were available to be mounted in the trunk, converting it into a 7-seat vehicle.

The most significant update was the P90D version with Ludicrous mode. A warp-animation appeared on the center screen, and the car was ready to hit the 62 mph in just 2.8 seconds. 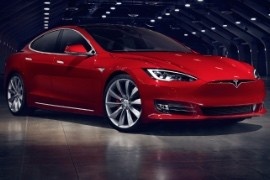