Toyota was known for a few attributes, such as off-road expertise and the hybrid revolution it brought along with the Prius.
It even combined these two elements, and the result was a range of premium SUVs with the

After doing intensive research, Toyota decided to join the plug-in hybrid evolution with the Lexus NX in 2020. But the Japanese carmaker made a crucial step when it launched the bz4X model. It was a BEV (Battery-Electric Vehicle) developed from the ground up.

The bz4X looked like no other Toyota on the road. Its tall front fascia with a curved spoiler at the bottom mimicked the car’s off-road abilities. It sported only a narrow grille on the lower side of the apron. Toyota enhanced the look of the wheel fenders with black, unpainted, plastic overfenders. At the back, a duck-tail lip spoiler and a raked-forward windscreen emphasized the crossover’s dynamic appearance. At the same time, a set of 20” light-alloy wheels completed the car’s high-rider stance.

Its futuristic exterior look was continued by the cockpit, where a TFT display replaced the traditional analog dials. Toyota named the interior design theme as “lagom,” which came from Swedish and defines the “just right” approach. Basically, it is a minimalist design. The carmaker placed the infotainment system atop the center stack with a touchscreen and wireless connectivity to both Android and iOS smartphones.

The bz4X platform, e-TNGA, featured a long wheelbase with wheels placed in the corners. Its four-wheel steering system allowed it to make very tight turns, with a radius of just 5.7 m (18.7 ft). Toyota worked together with Subaru to develop the all-wheel-drive system for the bz4X. Still, it offered it with a front-wheel-drive system as well. 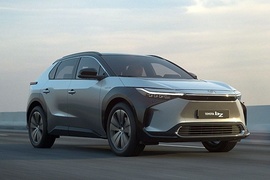