Top seller in the C-SUV segment, Toyota CH-R received a new and improved version for the 2020 model.
The new 2020 Toyota CH-R retained its original values and look, but added some spice in the engine department. The initial 1.8 liter unit remained, but it received a better lithium-ion battery. The 122 HP kept the same basic values for performances, but for those who ask for more, Toyota now offers e new 2.0 liter poweplant which produces, with the addition of electric motor, a total of 184 HP.

The new hybrid system can reach 44 MPG (5.3 l/100 km) fuel consumption. This engine won’t receive the new lithium-ion battery, but the older NiMH (nickel-metal hybrid) which was used before on the 1.8 liter engine. CH-R can be ordered with a small 1.2 liter turbo engine that delivers 116 HP which can be mated to a 6-speed manual gearbox or a CVT. On the inside, the biggest step is related to the HMI (Human Machine Interface) of the multimedia system. Toyota offers an app for either Android or Apple users which communicate better with the driver.

For the sound system, Toyota installed a new JBL developed sound system promising a hall-like sound experience. With 800 W thru 8-channel amplifier, it promises a close to CD sound even from compressed files. 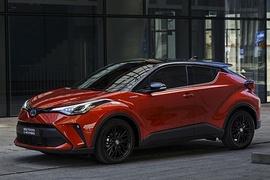