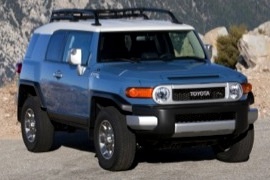 The name FJ had an important meaning for any Toyota Land Cruiser enthusiast.
And the FJ Cruiser was built to resemble that legendary model.

Launched in 2011, the FJ Cruiser resembled the 1970s – 1980s Toyota Land Cruiser FJ. A car that was boxy, rugged, and with a go-everywhere capability that made the 2011 SUVs slide out from the scenery. But it wasn’t just the look.

The FJ Cruiser took the old model’s front design and updated in a new interpretation. It was like a black & white old movie but remastered and colorized. And the designers did their job well. The round headlights, the straight, horizontal grille, and the angular wheel-arches resembled the old FJ40. Like the old model, the FJ Cruiser featured a vertical windshield with three wipers and rounded corners in the back of the greenhouse. The car featured rear-hinged rear doors, which could have been opened only if the front doors were opened first.

Inside, the retro-design was continued with a classic look for the dials and the big turning knobs for the ventilation system. Everything was designed to be used with a pair of working gloves on (apart from the steering-wheel buttons). The gear-selector and the transfer-box stick were mounted on the floor. Toyota didn’t want to put a push-button for the transmission. Its fans were known to prefer the simple, mechanical levers.

Under the body, there was a ladder-braced frame chassis. The front independent suspension and the solid rear axle were part of the rugged, yet comfortable, package. The car was offered with different transmission ratios, to be used on rock-crawling. The rear locking differential was standard for the manual transmission and fitted as an option for the automatic. 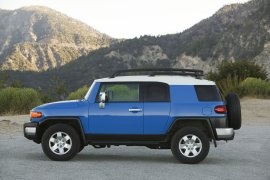 First unveiled as a car concept at the 2003 edition of the Chicago Auto Show and as a production model at the North American International Auto Show, the Toyota FJ Cruise is a 2+2-door SUV built by Hino Motors in Hamura, Japan.
The car is based on the Land Cruiser Prado platform and was initially supposed to remain a car concept but, thanks to the positive consumer reaction, the Japanese company started the production. FJ Cruise received multiple awards, such as the 2007 Lowest Ownership Costs in its Class, the 2007 SmartChoice Retained Value in its Class and a 2008 five-star rating at the safety crash tests.