The 2019 TRD Pro was a class leader mid-size truck with a great exterior design, as well as pure off-road capabilities.
If you’re wondering what TRD stands for, it is the Toyota Racing Development. Toyota integrated some of the elements of their successful race car into the TRD Pro.

The pick-up came with the already well known 3.5-liter V6 engine developing 278 hp. While not a new engine, it proved reliable over the years. The engine was mated to a 6-speed automatic transmission or a 6-speed manual. Users have said that the 6-speed automatic took a while to rev up, probably a trick for a reduced fuel consumption.

The exterior design was clean, with clear lines and overall very good looking. Underneath the headlights we could find black fake vents, a small detail that changed the entire fascia if you ask me.

The fog-lamps were very small and someone could think they did not do a very good job due to their size, however, they were full LED and lightened up the road.

The big front grille was refreshed and included a modified badge; the letters of “Toyota” were spaced out.

The aggressive presence of the TRD was also completed with the hood scoop pumping out of the hood. 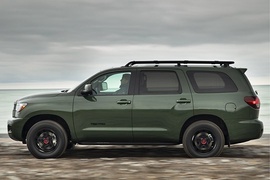