Toyota cared to make a three-box sedan version for its small-segment vehicle, the Yaris.
But the surprises didn’t stop there.

When Toyota offered the Yaris sedan for several emerging markets was no surprise. But when it offered it to the North American customers, the surprise was twice as much, especially since the car was a re-badged Mazda 2 with a different shape.

From the outside, only the headlights might give a clue that under that bodywork was a Mazda 2 vehicle. At the front, the huge grille from the lower side of the bumper reminded us of the “Jaws” movie, while the two sculptured lines from its sides might remind you of the Storm Troopers masks. From its sides, the Yaris Sedan featured a curved beltline, like a waved line from headlights to taillights. The Japanese designers from Mazda did a good job of that.

Inside, it was a Mazda 2 from top to bottom, except for a few Toyota badges on the interior. Depending on the trim level, the carmaker installed an infotainment screen on top of the center stack. Its display was not touch-sensitive, and it was controlled via a rotary knob placed between the front seats.

Under the hood, Toyota offered the Sedan version with only one engine option: a 1.6-liter gasoline unit. It was paired as standard to a 6-speed manual, while a 6-speed automatic was on the options list. 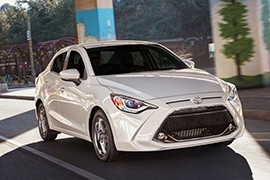