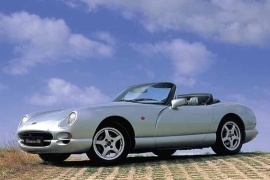 TVR Chimaera is another 2-door convertible sports car manufactured by the British company TVR and was produced between 1992 and 2003.
The name of the car comes, just like the TVR Cerbera, from the Greek mythology. Chimera was a creature with parts from multiple animals, similar to TVR’s vehicle which used an engine based on the Rover V8. Even if it was launched in 1992, Chimaera had an impressive line-up of optional features, including the power assisted steering, the air conditioning, the full leather interior, the gold colored badges and the chrome steering wheel.