Just like the hatchback version, the 2020 Vauxhall Astra Estate received a mid-cycle facelift approximately four years after its original launch.
The seventh generation of the Vauxhall Astra has been slightly revamped from a visual standpoint so the station wagon version has received the same updates, including an all-new engine range. With reduced CO2 figures and improved fuel economy, the refreshed Astra Estate has improved in almost all areas.

Despite looking almost identical to its predecessor, the new exterior has been developed in the wind tunnel, thus contributing to a drag coefficient of just 0.25, which even betters the hatchback version and is a record in the segment. Just like the hatchback, the new Astra Estate gets new turbocharged gasoline and diesel engines. Three-cylinder turbocharged gasoline powerplants are available with both 1.2 and 1.4-liter displacements, while the power outputs range from 110 to 145 horsepower. The 1.5-liter, three-cylinder diesel offers between 105 and 122 horsepower. 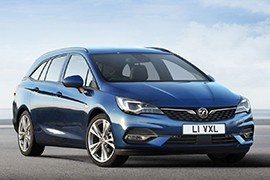