With an increasing demand for SUVs and crossovers, Volkswagen decided to introduce a lifted version for its smallest member, the up!

The young and active people are more prone to go out in nature either for camping or just running around on the forest’s unpaved paths.
But most of them were not keen to buy large SUVs just to use them in their weekend trips. For them, and not only Volkswagen also introduced in 2016 a lifted version of the up!

On the outside, there were clear differences between the two brothers. The Cross up! featured offroad-inspired features such as front and rear chromed protective aprons. Its 15 mm (0.6”) higher ground clearance led was required to create that crossover look. Volkswagen installed black plastic moldings on the rocker panels and on the wheel arches. The carmaker added a set of satin-silver finished roof rails on top of the vehicle, like it knew that the trunk was too small to fit a backpack inside.

Inside, the Cross up! featured the same interior as the rest of the up! Range, with a chromed satin finish for specific details and on the steering wheel. Its interior trims from the dashboard and door panels matched the car’s body color. At the front, the carmaker installed bucket seats with integrated headrests, while the rear 50/50 split-folding bench could expand the, otherwise, pocket-sized trunk.

Under the hood, Volkswagen installed only one engine option, a 1.0-liter. It paired it with a 1.0-liter engine, with or without a turbocharger. 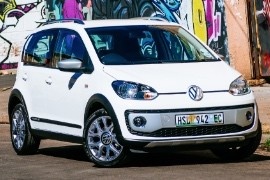