Volkswagen introduced a new generation of its Golf-based MPV Sportsvan in 2014 and added a mid-life cycle refresh three years later.
Volkswagen introduced the Golf Plus in 2004 and kept it on the market until 2014 when it replaced it with the Golf Sportvan, an MPV based on the same platform as the Golf MK7. After its more notorious sibling received a mid-life cycle impulse, the minivan brother followed and got refreshed.

At the front, the 2017 model featured a new pair of headlights with standard halogen lamps and LED daytime running lights. As an option, the carmaker provided the Sportvan with full-LEDs instead of Xenon brights. In addition, the front bumper received an updated look with sharp, angular lines that evoked a sportier design. At the back, the carmaker added LED taillights fitted as standard for the entire range.

Inside, Volkswagen upgraded the infotainment system. It introduced an eight-inch screen as standard with an option for a Discover Pro unit that featured a 9.2” display on the center stack. Additionally, the carmaker provided an option for an interface named Media Control, which the owner could install on a smartphone or tablet, enhancing the onboard experience. Depending on the countries, the Sportsvan came equipped with a WiFi hot-spot. As part of the safety package, the carmaker added automatic braking features, including pedestrian detection.

Under the hood, the 2017 Sportsvan ditched the famous turbo-diesel engines from its lineup for specific markets but kept two of them for the European customers. Its gasoline units ranged between 85 hp and 150 hp. 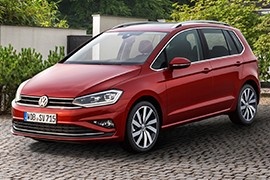