Volkswagen introduced to the world the second generation Sharan model at the 2010 Geneva Motor Show, only one month before SEAT launched the Alhambra (a model largely developed on the Sharan).
The German carmaker proceeded to some major changes for the new gen Sharan, revealing a car longer, wider, lower and with a longer wheelbase as compared to its predecessor. Weight reduction was also a factor when designing the new Sharan, as the car is lighter by approximately 30 kg. Another important change regards the door opening system, as the rear doors now slide open, rather than being hinged. 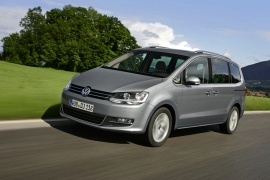