After cutting a deal with Mercedes-AMG, the British brand Aston Martin managed to revive its lineup and created the most powerful SUV from the market in 2022: the DBX707.
Sure, the traditional supplier for the James Bond movie franchise was mostly known for its GT vehicles and sports cars and less for SUVs. Yet, since these vehicles were in high demand, Aston Martin introduced the DBX in 2020. Then, two years later, it brought the DBX707 version, which was the most powerful SUV on the market.

When compared with its less-powerful sibling, the regular DBX, the 2022 upgraded version features some exterior differences. At the front, it features a bigger grille than its stablemate and a different bumper design with a wider lip for an improved aerodynamic load on the front axle. Aston Martin installed standard 22” alloys with a 23” set as an option. The side sills were also redesigned to reduce the ground effect on the vehicle while moving at high speeds. But the most evident changes are on the back, where the carmaker installed a wider roof spoiler enhanced by a carbon fiber lip. The bumper is offered with a wider lip available in carbon fiber trim. If all of these might get unnoticed, then the four pipes poking through the bumper were not.

Inside, the most important upgrade was for the sport bucket seats with the Aston Martin logo embroidered on the headrests. But unfortunately, it featured a two-generation old infotainment system carried over from Mercedes-Benz.

On the tech side, apart from the 707 hp V8 under the hood, the car got standard carbon-ceramic brakes with larger rotors than its sibling. Also, the 9-speed automatic gearbox was similar to the one found in the AMG GT, with a wet-disc clutch system instead of a torque converter as the regular DBX. 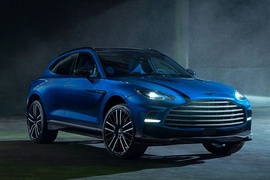