Gone are the days when “wind in hair” was an idiom exclusively used for convertibles.
But for the 2020 Aston Martin V12 Speedster the correct expression would be “wind in your face”. The almost one million USD supercar doesn’t have any windshield or roof or side windows. Only some bodywork and some wind-deflectors. That’s it! For some, it will look like a rocket on the road.

The new V12 Speedster recalls past glories from Aston Martin’s history. In 1959, Aston Martin took the first prize in the 24h of Le Mans race with the DBR1/1, with Sir Stirling Moss at the wheel. That particular model was an inspiration for the V12 Speedster from 2020. The car should have been shown at the 2020 Geneva Motor Show, but since it was cancelled due to the COVID-19 flu, it was only shown online.

The long hood covers the 5.2 liter twin-turbo engine, which produces 700 hp and 753 Nm (555 lb-ft) of torque. Transmission is to the rear wheels via an 8-speed ZF automatic gearbox. Performance numbers are according to the brand’s reputation. The 0 to 100 kph (0-62 mph) sprint is done in 3.5 seconds, while the top speed is electronically limited to 300 kph (186 mph).

The production of the Aston Martin V12 Speedster is limited to 88 units. 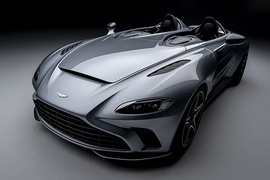