The 2012 Aston Martin Zagato was a derived model of the Aston Martin Vanquish V12 but slightly reshaped.
Only 101 vehicles were made and they’ve sold them all before the production ended.

After Aston Martin split from the Ford Motor Company, the new management started to make cars differently and, also, started to bring more smiles to its employee’s faces. For starters, they went for endurance races with almost stock vehicles and one of the drivers was the CEO. Things got even better when they started to win races or, at least, win their class.

The Zagato model was based on the Vanquish, but with aluminum body panels that were reshaped. On the roof, a pair of bubbles appeared like in the old-days race cars. The profile of the vehicle was completely different, with an aircraft-inspired cockpit. In the back, a big wing was installed on top of the trunk. Some said that the car resembled a Nissan GT-R, but since the aerodynamic was the same for everyone, the results could have been similar.

Inside, there was a race-inspired cockpit, but with the usual amenities expected from an Aston Martin with suede, leather, carbon fiber and aluminum. It still kept some stocks from Ford, but it got rid of the robotized gearbox that brought a lot of troubles to the Aston Martin Vanquish. 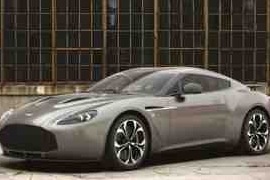