The 2012 Audi A5 Cabriolet was the open-top version of the A5 Coupe.
It was unveiled at the 2011 Frankfurt Motor Show and it wasn’t a completely new model, but a mid-life refresh.

After a long time when Audi didn’t offer too much for the open-top car segment, it started to recover offering more than ever: the TT Roadster, A3 Cabriolet, A5 Cabriolet, and the R8 were built for every taste and more budgets. The A5 Cabriolet, though, was the only one that featured four real seats, unlike the A3 which offered a very small room on the back seats.

The refreshed design included the LED daytime running lights inside the headlights, a redesigned grille and front bumper with pronounced air inlets. On the side, it was the same vehicle, with panels from the coupe. In the rear, there was an option for new, LED light strips for the taillamps.

Inside, there was a button used to adjust the optional seat heating and ventilation in three stages. The selector for the automatic transmission was redesigned. The buttons on the steering wheel were redesigned as well. All displays were illuminated in white. For thermal comfort, warm air was blown to the neck of the front occupants.

Under the hood, engines were ranging from a four-pot 1.8-liter TFSI up to the 4.2-liter RS5 version. There were four TDI versions and three TFSI engines offered, mated to a manual or automatic transmission, with front or all-wheel-drive, depending on the engine. 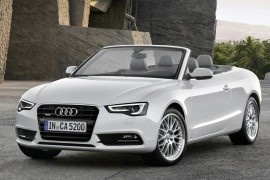