Before changing the generation, Audi did the last improvement for the third generation of its compact-sized sedan and brought the S3 Sedan to the market.
Even though the A3 range was already old on the market, as a last push for the sedan version, the German car-maker made the last move with the introduction of the S3 sedan, a car that could serve as a family vehicle and as a sporty sedan as well.

The beauty of the 2020 S3 sedan was the fact that it was a true factory sleeper. Unlike the RS3 sedan, it didn’t feature the same flamboyant aerodynamic elements that could make it stand apart from the crowd. Though, some details could attract the eyes with the sportier front bumper and the bigger, 18” light-alloy wheels. In the back, under the specific apron design, there was four exhaust that could tell the difference between a regular A3 and the S3.

Inside, the S3 came fitted as standard with the Audi Virtual Cockpit, which replaced the analog dials with a TFT display. In the middle of the dashboard, over the center stack, a retractable screen for the infotainment system was installed. It was a very elegant solution, but the system didn’t feature a touch-screen monitor.

The S3 featured a twin-turbo gasoline engine with direct fuel injection. It offered 310 hp and it was mated to a standard 6-speed manual. Power went in all four corners. As an option, the S3 was fitted with a 7-Speed S-Tronic (automatic, dual-clutch) gearbox. 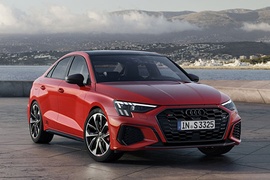