Sharing is caring.
At least this is what they say. But sharing a ride with a super fast car was usually possible with only one friend.

That was no longer the case with the new Bentley’s Continental GT Supersports. The machinery was an extremely fast and luxurious 4-seater. We could also call it a social super car, as it was not designed for track. It didn’t do bad on the track either, but the turns did not offer a racing experience.

The impressive 6.0-liter V12 engine developed 700 hp and 750 pound feet of torque and could rocket from 0 to 100 kph in only 3.5 seconds. Isn’t that amazing for a 2280 kg vehicle? Sure, Bentley worked hard on making in lighter than the previous ones and used carbon ceramic discs and a titanium rear exhaust box designed by Akrapovic.

The engine was mated to an 8-speed automatic transmission that almost reponded instantly while actioning the paddle shifters.

Impressive on the outside, powerful engine, but the interior was breathtaking with carbon accents, Alcantara and manual stitchings. The gauges were classic, simple and very intuitive.

Only 250 units were produced, another reason why „cheap” was never a word to define it. 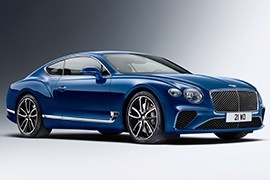