The third generation of the Bentley Continental GT was launched at the 2017 Frankfurt Motor Show.
One year later, in November, the Convertible version was shown. It might seem strange to see an open-top vehicle launched when winter was coming (along with the 8th sequel of the Game of Thrones), but it was the right moment since the waiting period between order and delivery took just about enough for the car to be ready in the spring.

But the GTC was an open-top Granturismo, built for relaxed driving. It doesn’t have a big trunk. The interior features are top quality, with beautifully crafted leather, custom stitches with designated colors. But the feature that attracts the biggest applause was the Bentley Rotating Display in the middle of the dashboard, which is like in a 007 movie when at a touch of a button a panel rotates and reveals a 12.3” touch-screen, and on the other side there are three analog dials. 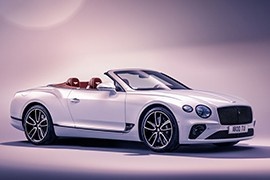