This special edition State Limousine was introduced by Bentley in 2002.
Aimed as Queen Elizabeth II’s new official state car, this model was based on the Arnage R version and fitted with a 6.75L twin-turbocharged V8 delivering 400 hp. As compared to its based model, the Bentley State Limousine featured a more spacious interior - longer wheelbase, wider and taller interior - and extremely safe cabin. Some of the safety components included suicide doors, anti-attack armoured glass and a mine-resistant floor. Only two such models were produced by Bentley, both for the Royal Family (becoming one of the most exclusive cars of all time). 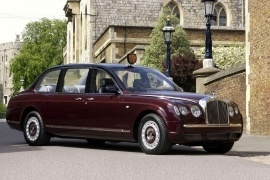