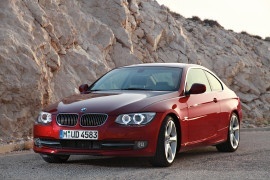 In January 2010 BMW has release a facelift for both the coupe and convertible models of its 3 Series.
Both the 3 Series Coupe and Convertible will be officially launched at the 2010 Geneva Auto Show. This facelift brings minor changes to the car’s exterior and introduces two new engines the 318i and the 320d EfficientDynamics, while improving all the other units in terms of fuel consumption and efficiency. The Coupe received restyled headlamp and stop lights, a redesigned front bumper and restyled exterior mirrors. The interior receives new upholstery choices and new shift paddles for the automatic transmission. 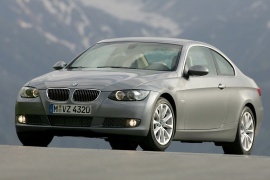 The 3 Series Coupe was launched in 2006, a year after the four-door version.
That was not something unusual, but the completely different styling, when compared to its sedan sibling, was a shock for the brand’s fans.

The first 3 series was launched in 1975 and it was available as a two-door only. The first sedan appeared in 1983, a year after the second generation was launched, as a coupe. In 2005, the fifth generation was first launched as a sedan and, a year later, as a coupe. The German car-manufacturer succeeded to bring all the good features from the sedan version but added an individual identity of its own for the coupe.

Almost no body panels were carried over from the sedan. The plastic front fenders the doors or the rear fenders were different. The different headlights inspired an aggressive car, able to deliver strong performance. And, in most of the engine versions, that was true. Unlike the sedan, the coupe featured frame-less windows for the doors. The rear windows were fixed.

Inside, the dashboard was carried over from its 4- or 5-door siblings. But the similarities are ending there. In the back, there was a limited room, only for two passengers. The high, transmission tunnel that crossed the cabin from front to back, didn’t leave enough room for an adult middle passenger.

For the engine and transmission, the 2006 3-Series Coupe, or E92 as it was known by the brand’s enthusiasts, took most of them from the sedan version. But it was not fitted with engines lower than a 2-liter segment. 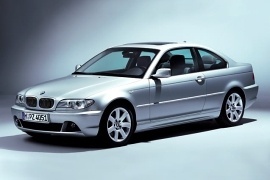 BMW refreshed the 3-Series Coupe in 2003 and brought significant changes to the car’s exterior and on the technical platform.
For several years, BMW was the only important producer of a compact-segment coupe on the market. Mercedes-Benz was not focused on that area, and Audi was far behind. But BMW had a long tradition for the 3-Series coupe and had to keep it running.

Inside, the carmaker installed a new steering wheel. On the center stack, BMW introduced an infotainment unit that included the navigation system as well. Depending on the trim levels and options, the carmaker offered power-seats.

Under the hood, BMW removed the two-liter inline-six engine. It was sad news for the 3-Series fans since all its predecessor featured one ever since the first generation of the 3-series. But they could choose from a 2.0-liter inline-four or a 2.2-liter inline-six instead. The 2003 BMW 3-Series was the last generation that used naturally aspirated gasoline engines. Unlike its four-door sibling, the coupe was available as a rear-wheel-drive only. 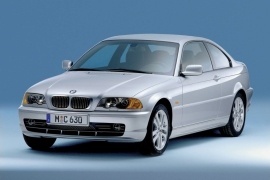 Also, the 3 Series Coupe featured a stiffer suspension than its saloon counterpart and challenged the Mercedes-Benz CLK and the Volvo C70 on the premium coupe segment. Some of the new features fitted into this 1999 3 Series Coupe included Automatic Stability Control with Traction (ASC+T) and Cornering Brake Control (CBC). This model received some slight restyling in 2003, featuring new wings, front bumper and front & rear lights.

Compared to its predecessor, the E36, the E46 was built on a longer chassis and overall the car was longer, wider and lowers, changes that made the car even more stable and more powerful.
The safety equipment included dual front airbags, side airbags and curtain airbags for the front passengers, as well as ABS, ESC, traction control, cornering brake control and electronic brake force distribution. 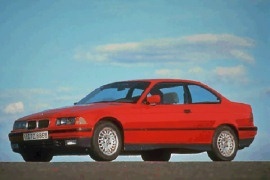 The 3 series started its career in the ’70s only in coupe form but evolved over the years into a full line of bodyworks.
But the coupe was not dropped and, in the third 3-series, the coupe played an important role in the market. It was shown in late 1990 and the sales started in 1991.

The E36 was a complete change in the 3-series design. From the exposed rounded headlights to newly developed twin headlamps under the same glass, it was a big step and many fans didn’t agree with it. But the car was better from any point of view. The new suspension, bigger wheelbase and bigger engines were enough to place the car on top of the premium compact-sized sedans on the market. And the coupe went a step further with its doors with frameless windows.

The interior featured a dashboard turned toward the driver, with accessible controls and a good layout. The low sitting position was very well received by the customers who were looking for a true sports car at a decent price. In the rear, there was enough room for two adults. Depending on the trim level and options checked on the list, there were front highly bolstered seats, heated and power-adjustable.

Under the hood, the basic engine was a carry-over from the E30, but that changed from the facelift model that happened in 1995. The top model, apart from the M3, was the 328i version, with a newly developed 2.8-liter unit. The standard transmission for the entire range was a 5-speed manual and a 4-speed automatic was offered as an option. 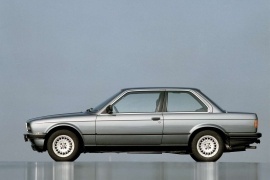 In 1982 BMW showed the second generation of its small, two-door, compact vehicle, the 3-Series.
The E30 was considered a milestone in the German car-manufacturer.

Its design was simple. The straight lines, four rounded headlights and a slightly raked stance were part of its charm. It wasn’t a car that shout about attention, but it was a car that gathered interest from everybody. It offered engines for every budget and every needs.

Even if the coupe was offered with two doors instead of four, it featured the same wheelbase and the same overall length or height. The grille was flatter when compared with its predecessor, the E21. In 1987, a mid-life cycle refresh was added and the chromed exterior details were changed to black. The headlights and taillights had received a new design.

For the engine bay, the German engineers installed powerplants started with a 1.8-liter unit and up to a 2.7-liter version. The latter was built for economy and it wasn’t the most powerful version. Apart from the M3 top-performer, the fastest version was the 320 iS that had a 2.0-liter engine with 192 hp. It was very close to the magical figure of 100 hp/liter value.

The car introduced few technical novelties for the 3-Series such as the turbocharged diesel engines and the all-wheel-drive system, which was available only on the 2.5-liter unit. 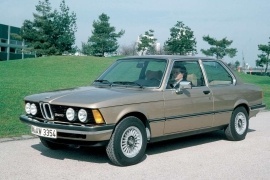 The motorsport industry in the early ’70s was crowded with Italian, British, French and German cars. Swedish brands also had something to offer with. But while some car-manufacturers were more concerned about large coupes, grand-touring cars and supercars, BMW focused on light vehicles that could serve as daily drivers and also be able to offer some satisfaction on the tracks.

The first generation of the 3-Series featured the so-called “shark-nose” with a rearward angled front grille. The first models featured two rounded headlights. The 2.0-liter and above engines were fitted with twin-headlights design while the other featured just two round headlights. The three-box design vehicle was offered only with two doors and it was available in a top-cabriolet version that was built by the custom coach-builder Baur.

Inside, there was room for four passengers and, depending on the engine option, the instrument cluster featured a tachometer or an analog clock. The dashboard was tilted toward the driver position.

The car was offered with a standard 4 or 5-speed manual transmission and some engine options were offered also with a 3-speed automatic. The top-model was the 323i version that featured a mechanical fuel injection system developed by Bosch. The 323 was offered with a choice of three different manual gearboxes, one with 4 and two with 5-speed, one with a dog-leg pattern.