After its launch, the BMW i3 evolved and topped the charts among the electric car sales around the world.
It was the most sold premium electric vehicle in the world. In 2017, a new version was launched: the i3s.

BMW sporting heritage is known. The introduction of an electric vehicle in its range was surprising, but when the little i3 was compared from the performance-wise to other electric compact vehicles, it proved to be sportier. The i3s came to add more to the already nimble i3.

The i3s came along with new color options, including a red and black theme. It also featured a new, exclusive, 20” wheel design. There were few other small details such as reshaped bumpers and a sport suspension that lowered the ground clearance by 10 mm (0.4”) and wider track by 40 mm (1.6”). For the headlights, new full-LED units were installed for both low- and high-beams.

Inside the i3s the design and the materials used were premium, eucalyptus unpainted wood. The natural fiber used for the upholstery also were wood-based. The instrument cluster was a full TFT display. The i3s was roomy and provided easy access due to the four doors and the rear doors were read-hinged.

With a bigger power and an adjusted DTC (Dynamic Traction Control) mode that boosted agility at higher speeds and during sporty cornering. And, according to the official press release, it even allowed “mild and safely controllable drifts when grip levels are reduced”. 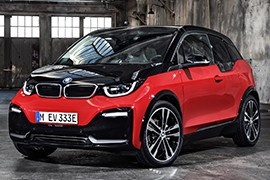