The Bristol Cars Limited was founded in 1945 when the already existing Bristol Aeroplane Company started a car division.
The Bullet was launched to celebrate the British company’s 70 years anniversary and it was the manufacturer’s first new design in 12 years.

The front featured classical round headlamps, round foglamps, a big grille in the middle and muscular front fenders.

The rear fascia featured a clean bumper and a dual exhaust.

The Bullet’s body wwwas made entirely from carbon fiber and the materials used were of premium quality and provided a modern feel throughout the vehicle.

The cabin was fitted with a classic design, with leather all around, on the dashboard, the seats, the steering wheel, the gear knob and the hand level, as well as the door panels. The chrome accents used defined the luxurious interior.

The Bullet was equipped with powerful engine that cranked out 370 hp and was mated with a ZF 6-speed automatic transmission that sent the power to the rear wheels.

In the sprint to 100 km/h, the Bullet took only 3.8 seconds, showing its true sports car nature.

The starting price was around $330,000 and its production was limited to 70 units, with all vehicle being hand built. 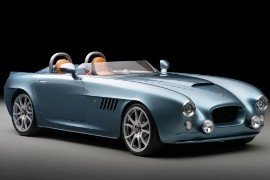