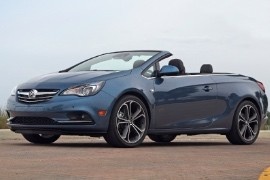 Already available on other markets since 2013 under the nameplate of Opel Cascada, the Buick Cascada reached the US shores in 2015.
The exterior design was pretty much the same as the European one, with no visible roof top covers, a clean profile and a sporty front-end with a bulged hood and sharp angled headlights.

With lots of options on the market, the convertible Buick Cascada was one of the least expensive choices, while still offering comfort and decent room for 4 occupants.

A smaller price had to come with some compromises, such as the 1.6-liter 4-cylinder engine that produced 200 hp. 200 hp should not sound that bad, but the Cascada was a heavy car, thus acceleration was a bit disappointing.

On the other hand, the Cascada was a little more practical than its competitors. While the back seats were actually usable, the trunk size was bigger than the usual capacities available with most convertibles.

The 2016 Buick Cascada was offered in two trim levels: the Base and the Premium.