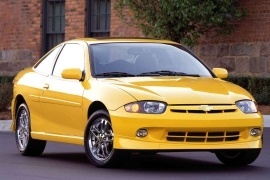 GM launched the 3rd generation Cavalier model in 1995, with this particular model being the result of a Phase III development of the last series.
The coupe version of the Cavalier suffered from the same handling problems like all its previous variants, losing out big time to its Japanese rivals on the coupe sector. The Insurance Institute for Highway Safety rated the Cavalier as the worst car in terms of safety features, while also the ‘Highest rates of driver deaths’. The model was discontinued in 2005, despite a decent amount of sales throughout North America. 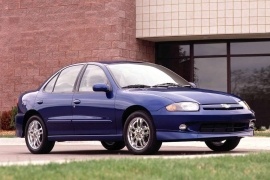 By 1993, Cavalier was the most popular product in the GM’s line and the fourth best-selling vehicle in the U.S., but it was already an old model, so, in 1995, Chevrolet introduced a new generation.

While most of its Cavalier customers were car-fleet and rental companies, Chevrolet tried to sell the small four-door vehicle to private customers as well. Thus, they worked hard to develop the J-body generation, which was available in three shapes: coupe, convertible, and sedan.

The design was very different than the third Cavalier generation. It featured a narrow front end with a curved hood and raked A-pillars. Its headlights were designed with curved lines ended in sharp angles on the sides. The arched roofline and sloped rear windscreen gave the car an Asian or European look. But that wasn’t all; in the back, the taillights were spread across the quarter fenders and the trunk lid, which was not very common for a Chevrolet.

Inside, the fleet and rental car feeling were alive and well. The interior featured cheap plastic, a toothbrush-style gate for the automatic transmission lever, and buttons that could look good on a dryer. Nevertheless, the upholstery didn’t offer a charming look. At the front, the low and flat seats didn’t provide any kind of bolstering, and in the back, the flat bench was, at most, adequate for two adults and hardly acceptable for three.

The surprise was on the technical side, where Chevrolet offered a strong 2.2-liter engine, which was developed by Opel in Europe and detuned by GM in the U.S. to run with 82 octane gasoline. A five-speed manual was fitted as standard, while a four-speed automatic was on the options list. 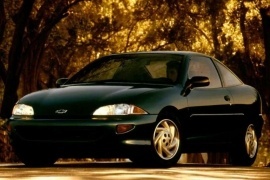 When Chevrolet tried to make an econobox, sporty vehicle, it came with this: the 1994 Cavalier, one of the most affordable coupes on the market.
The Cavalier was available in three body shapes: coupe, convertible, and four-door sedan. The coupe was built to compete against the Honda Civic and Dodge Neon and received an Asian-European styling while keeping the same plastic interior as any other Chevrolet from that era.

Its rounded lines and swept-back headlights looked fresh on the market. The arched roofline and sloped rear window made the car looks sporty. In the back, its taillights were spread across the quarter panels and the trunk. Chevrolet offered the car with a standard set of steel wheels, which looked too small and lost under the wheel-arches, but offered bigger alloys with wider tires on the options list.

Inside, the carmaker installed a curved shape for the instrument cluster that went on to the center stack. Its four-dials instrument panel featured a center-mounted speedometer with the tachometer on the right. The rear seats were good for two not-so-grown adults, as long as the front occupants didn’t have to move their seats all the way to the back.

Under the hood, Chevrolet installed a 2.2-liter gasoline engine provided by Opel and detuned for the U.S. market to comply with the emission tests. For the Z24 version, it installed a 2.4-liter unit that provided more power and torque than its main rival, the Dodge Neon. 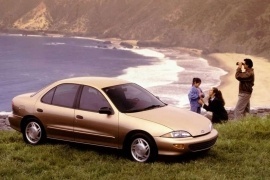 This is the first Chevrolet Cavalier that had a more streamlined look, as opposed to the more boxier look of the older models.
It was notorious because of its low scores in crash tests made by the Insurance Institute for Highway Safety (IIHS) and National Highway Traffic Safety Administration (NHTSA). The IIHS also rated the Cavalier as the “Highest rates of driver deaths,” with 150 deaths for the 4 door version and 171 deaths for the 2 door model per million registered vehicle deaths. The previously available V6 engine was ditched so all you could have were inline-four. 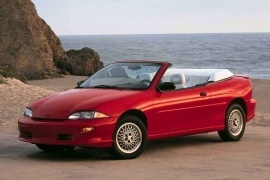 Chevrolet tried to get more market share and introduced an affordable open-top version for the third generation of the small-sized Cavalier.
The American carmaker introduced the Cavalier nameplate on the U.S. market in 1981 for a vehicle based on the European Opel Ascona/Vauxhall Cavalier. It was a simple, affordable solution for Chevrolet to offer a compact-sized lineup that could get more attention from the younger customers. While the first generation was focused on practicality, its successor changed its focus toward sporty driving and open-top experiences. Chevrolet introduced the third generation in 1995 as a sedan, a coupe, and a convertible. It fought against Honda Civic, which didn’t have a rag-top version.

Its rounded lines and swept-back headlights looked fresh on the market. The cabriolet was based on the coupe version and shared a few body panels with that. While its design was not very aggressive or bold, it wasn’t bald either.

Inside, the carmaker installed a curved shape for the instrument cluster that went on to the center stack. Its four-dials instrument panel featured a center-mounted speedometer with the tachometer on the right. Even though the car sported four seats, the rear ones were more suitable for a pet or a small child in a child seat.

Under the hood, Chevrolet installed a 2.2-liter gasoline engine provided by Opel and detuned for the U.S. market to comply with the emission tests. It was paired to a standard 5-speed manual while a 4-speed automatic was on the options list.