Exactly one century after Chevrolet delivered the first truck in January 1918, the American brand started the deliveries of the 2019 model Silverado.
The new range was shown in December 2017 in Fort Worth, Texas.

Silverado was a completely different line than Colorado, which was a class smaller. Depending on the loading capacity, the Silverado was available in three specs: 1500, 2500, and 3500. 2500 was built for those who are using the truck for daily driving with heavy loads.

The 2019 Silverado 2500 was longer, wider and stronger than its predecessor. The front headlights were smaller, with a styling cue that could resemble the Camaro headlights design. The fenders were enlarged for a stronger visual look. In the back, on the tailgate, the Chevrolet word was embossed into the metal sheet. Bigger, 17” alloy wheels were installed on the truck.

Inside, there was the typical dashboard design, like a wall in front of the front passengers. The instrument cluster featured more information on the six dials and on a small TFT display placed between the speedometer and tachometer. On the center console, the infotainment system featured 4G LTE Wi-Fi connectivity, Apple Car Play, Android Auto, and OnStar safety and security features. For the rear passengers, the room was a little cramped, fit for short journeys to and from the working site. For those who want the truck for family use, the crew-cab would be a better choice.

Under the hood, the Silverado 2500 offered with six engine versions, including new 5.3-liter and 6.2-liter V8s, plus a new inline-six 3.0-liter diesel. The diesel and the 6.2-liter were mated to a 10-speed automatic transmission, while the other versions were equipped with a 6-speed automatic gearbox. 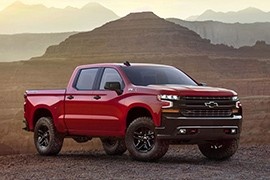