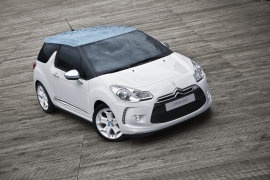 Citroen introduced the DS3 range in 2009 and started to sell the vehicle in 2010 as a premium hatchback.
The French carmaker appealed to the glorious DS model from the ’50s and ’60s. It was the beginning of a new evolution in the Citroen range. The DS was supposed to be an upmarket range of products. Later on, the DS (spelled deesse – goddess in French) became a distinct brand with a unique design. It was built on the same platform as the Citroen C3.

At the front, the car featured a large trapezoidal grille on the wrapped-around plastic bumper. It sported a DS badge on the hood and the “double-chevron” chromed logo on the grille. On the bumper’s sides, the designers installed vertically arranged daytime running lights with LEDs. The B-pillar was black on its upper side. Thus, the design team created an image of a fake cabriolet.

Inside, the DS3 followed an unusual concept, where a big part of the dashboard had the same color as the car’s exterior. Its front bucket seats sported side bolstering. Citroen made the three-door hatchback on the same platform as the regular C3 but with an utterly different cabin.

Under the hood, the carmaker offered a choice of gasoline or turbo-diesel engines. They ranged between 92 hp and 202 hp. The latter was for the limited-edition Racing.