Unveiled at the 2012 Los Angeles Auto Show, the Fiat 500e is powered by a permanent-magnet, three-phase synchronous drive electric motor rated at 111 HP and 147 lb-ft of torque.
Available only in California, US starting July 2013, the Fiat 500e has a 24 kWh Lithium-Ion battery and offers a range of 87 miles, while combined efficiency rating is of 116 MPGe. The motor is connected to a new single-speed gearbox that provides calibrated gear reduction, lower electric motor input speed, and decreased battery usage. The 500e will become available to other US states with mandates of sales for zero emission vehicles later in its life. However, the EV won’t be sold in Europe. The Fiat 500e is all-new for 2013 and all-electric underneath. Now, it’s available in other colors than this sexy orange, but not in other states than California. That’s because Fiat doesn’t actually believe in the affordability of electric mobility at the moment but has been forced by the California Electric Car Mandate to make the 500e if it wants to sell cars this state. That said, we can’t take anything away from the design or engineering of this tiny machine. It’s actually peppier than the regular 500 because of the torque put at its disposal by the electric motor. If you can put up with the tiny cargo space and token back seat and can afford to do your part for the environment, maybe this is the EV for you. 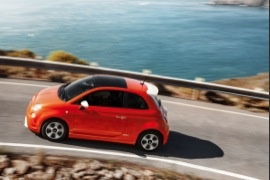