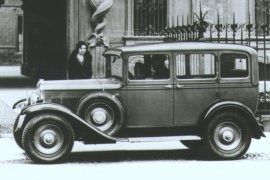 Introduced in 1929, the Fiat 514 was an evolution over the 503 model built before it.
The new lineup was built in three body versions: sedan, convertible, and roadster.

Just before the Great Depression, Fiat changed the lineup introducing the 514. In those times, the Italian carmaker occupied more than 80% of the Italian market. It introduced a car-insurance at the purchasing price since 1928 on the 509 model.

The car was built on a chassis with a central construction, which comprised the engine compartment at the front, the cabin, and the trunk. Like most of the cars from that era, the slim fenders were attached over the wheels. The sedan version featured two doors and a tall greenhouse with straight windows. For the roadster and the convertible version, there was a different look. While the former featured a trunk in the back, the latter was fitted with half-doors and a lower driving position.

The interior was fitted with leather upholstery for the bench and the interior door panels. A large, four-spoke steering wheel was chosen for all versions and the instrument panel was installed in the middle of the dashboard.

Fiat developed a new, 1.4-liter engine for the 514. It was offered with power ranged between 28 hp and 37 hp. All versions were fitted with a 4-speed manual gearbox.